Digital audio workstations (DAW) require an emphasis on stability, raw CPU horsepower, and hard disk performance.  This systems was designed to be very powerful while remaining economical.  Computers these days do not have any trouble handling real time audio tasks, a 5 year old machine can easily track audio and add real time effects using commercial software.  However, adding more complex projects and sample based software synthesized instruments can begin taxing the system and require some serious computing horsepower.  Each recording situation is unique, but generally the emphasis can be approximated like this:

CPU: More cores will be quite effective to distribute the load.
RAM: Not critical, as long as it’s stable and plenty for the OS
Disk: Any current generation SATA disk will work fine.  Only when running multiple 96k tracks or adding video workloads will disk performance become a concern.  Use a separate physical disk from the OS installation.

CPU: High clock speed and cache pay off more than many cores in many situations
RAM: The more the better, the samples will be stored in RAM for fast access so a 64 bit machine loaded with RAM will be the way to go
Disk: Again, any current generation SATA disk will do, but you should  add a third physical disk, one for OS, another for live audio tracks, and a third for sample banks

My workload is primarily live audio tracking and under pretty light workloads.  This is convenient since I don’t have a huge amount of money to throw into the system, so I went with a pretty cheap setup.  the system was updated in February 2013, and up to that point I had been using a 7 year old Athlon 64 setup under Windows XP and a very old version of software, Sonar 3.  Even with this age of PC, the system was still quite capable of a couple dozen real time effects and 16+ 24 bit audio tracks.  Coming from that starting point, even a super budget system will be a huge upgrade.  For cost, I used a Micro ATX motherboard, since I did not require more than 1 PCI slot and 1 PCI-Express slot for the dedicated graphics.  The onboard graphics, while capable are not required and disable to avoid any possibility of conflict due to shared memory access. 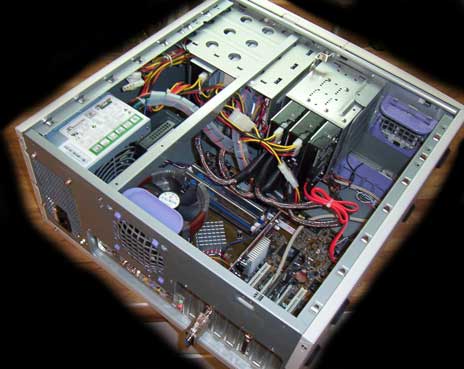 I have many computers availble in the house for use by the family, so this PC is dedicated to audio tasks only.  Typically I had recommended that a DAW be kept off the internet if at all possible, however that was back when Windows XP was the OS of choice and since the release of Windows 7 and 8, this is not as critical.  These operating systems are quite stable for dedicated audio use and you should have no trouble keeping them online and updated.  For mission critical applications, I would still recommend that the computer be kept away from the big bad internet.

In addition to the updated hardware, the system was built taking advantage of the promotional $40 Windows 8 Pro licenses (expired February 1 2013, so you’re too late).  There’s a great deal of argument over the direction Microsoft went with the user interface, namely the start screen, however the core of the system is based off Windows 7 and is even more streamlined to scale from full desktop workstations down to the touchscreen tables that the new UI was optimized for.  In testing, I’ve found Windows 8 to be stable and after an initial learning of the new UI, quite acceptable.

My audio software of choice has been Cakewalk products for a very long time.  This round was no different and Sonar X2 Studio was installed.  The main difficulty I’ve had is compatibility with the old versions of plug in effects I had been using.  My package of Waves plugins were way back at version 4 (current version is 9), and they did not like Windows 8 64bit.  Unfortunately there is no solution to this, a new license for the plug in software is required.

The home theater PC must be designed to not only provide adequate CPU power for movies and games, but to look at home among home audio components.  3D graphics horsepower was a primary concern for playing cutting edge games. 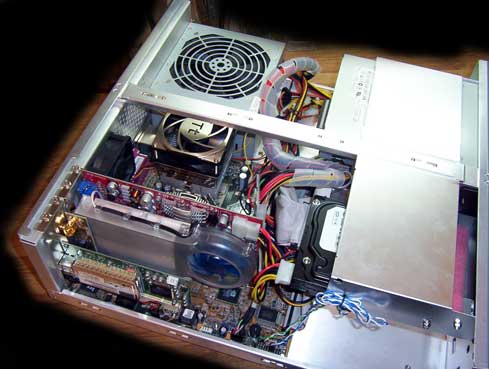 The design goal for this project was to make a fully functional Media Center PC for driving a modern HDMI input HDTV and the Coolermaster ATC610 case I had from the last configuration.  The first challenge was that the early revision chassis had little ventilation, none at all toward the front in fact.  I created two holes for 80mm fans in the front bottom of the chassis.  The feet keep enough clearance for air draw under the system and using low power fans at 7V keeps them silent.  The component choices are a balance of speed and price.  One of the tasks for this PC is transcoding of high definition video using Handbrake, so the quad core Phenom is a good budget choice for accomplishing that.

Audio from the on board system is connected two separate ways to the receiver for flexibility and true 5.1 surround.  All 6 channels are hooked up discreet analog to allow the 5.1 audio in games to be utilized while a optical digital output is connected to allow high fidelity two channel program to be used when desired. 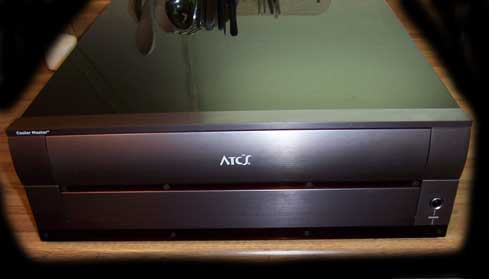