The Changing Computing Landscape Before getting into where Microsoft went with Windows 8, you may want to look at where the PC market is going these days. Many tech sites will throw out terminology like “Post-PC Era” and… Read More

Out with the old and in with the new. I’ve been limping along with a 10 year old DAW (that’s Digital Audio Workstation, if you didn’t know that).  Luckily for me, most of my recording work has been… Read More

Confessions of a Smartphone Junky

I’ll admit it, I have a problem. I’ve been mesmerized by the shiny new phones that are thrown out at the public every 6 months or so with newer, faster, better features that promise to augment every part… Read More

It’s been a little while since I posted on the position of the variety of CPU and platform options out there and much has changed.  The insatiable desire for longer battery life is pushing a whole new segment… Read More

Mac as a Home Studio Platform

Wogg studio falls into a significant and growing segment of the studio market, those that are build for personal use, not for profit, and generally done on a tight budget.  This market is led by performance for your… Read More

How to not lose all your files

If you’ve got a computer at home, I’m sure you’ve gathered yourself a number of files you’d like to keep around.  There just one thing threatening your ability to do so… someday, that computer will die.  That’s not… Read More

If you’ve read my horribly outdated system specifications on my PC page, you may conclude that I’ve given up on computers 4 years ago.  Well… not exactly, I do keep up on what’s happening and plan my eventual… Read More

Why the Mac vs. PC debate is stupid

I you read this site at all, you may notice that I happen to be a PC user.  I always have been, since my first PC, a shiny IBM Amiga with a 166MHz Pentium processor, 32MB of RAM,… Read More

Building your own PC 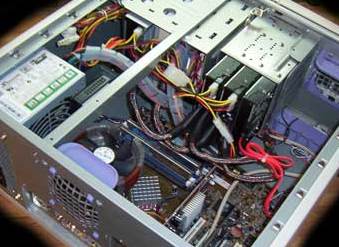 Picking your Components That nerdy friend of yours has been going on an on about his super fast custom PC for weeks. He’s always looking down on those that simply buy an out of the box computer, complaining… Read More

Video Cards – Game junkies This market moves faster than a cheetah on crack so I won’t spend much time here. You’ve got two primary choices for chip manufacturers, nVidia and ATI (now owned by AMD). These companies… Read More

If you haven’t shopped for a computer in a year or two you’ll be stepping into a market that has moved so fast your previous assumptions on what’s the best out there are likely to be completely wrong…. Read More