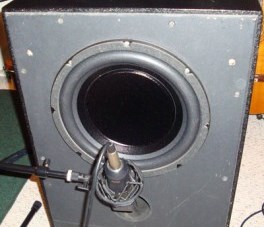 The original cabinet was built about 1990 with one design goal in mind.  Large cabinet volume = low frequency extension.  With about 4.4 cubic feet of internal volume this box was meant to allow a woofer to freely produce some serious low frequencies.  There were a few notable points when the cabinet was built:

In new design and construction, 3/4″ wood should be the minimum for a good subwoofer.  The subwoofer amplifier in this particular design is no longer available, but for a plethora of options, check Parts Express

The driver available at the time was a Pyramid Super Blue 12″ model.  Very inexpensive and designed for small cabinets in a automotive application.  This was used in the box for 15 years, but it was time to upgrade to a proper driver that better matched the cabinet.  The old woofer problems were:

An upgraded woofer was chosen based on software analysis to eliminate the under-damped condition and extend the frequency response to as close to 20Hz as possible without re-tuning the cabinet.

The choice: the Eminence Lab 12 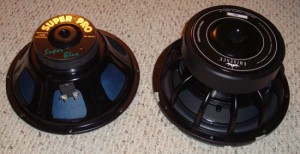 On the left, the Pyramid Super Blue and on the right, the Eminence Lab 12.  Now that’s a woofer!

To evaluate the before and after performance of the subwoofer, I measured actual output using software tools: 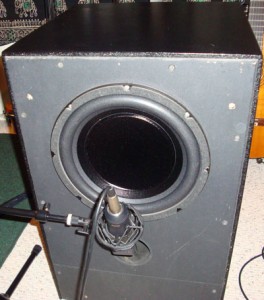 Close mic technique is common in speaker analysis and involves placing the measurement microphone within 6 inches from the speaker.  This takes care of several problems when measuring low frequencies:

There were a couple limits to this technique: 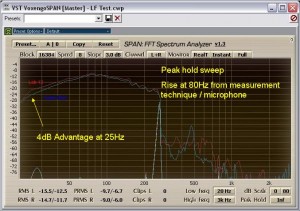 Frequency response was surprisingly similar between the woofers.  There is a distinct 4dB advantage at 25Hz with the Lab 12 woofer.  The real advantage becomes apparent when looking at the distortion of the woofers by watching the harmonic content. 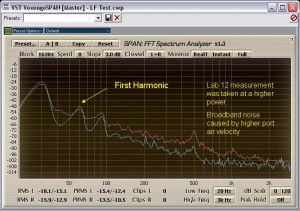 At 30Hz the Lab 12 woofer is already showing an advantage in harmonic distortion, in spite of a large disadvantage caused by the higher power input during measurement. 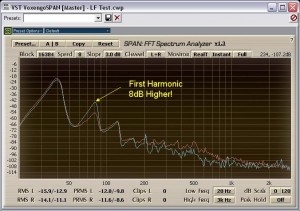 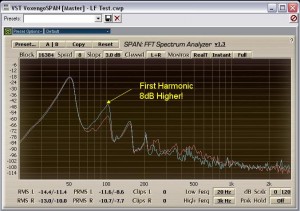 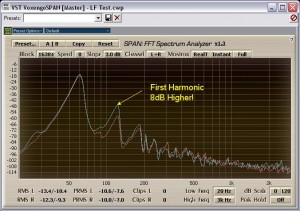 All measurements across the subwoofers intended range show the Lab 12 woofer has a huge advantage with a much lower harmonic output.  The difference in the first harmonic was about 8dB across the band. 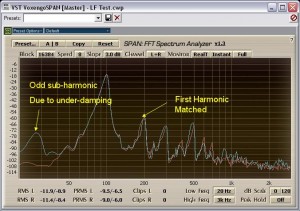 An interesting anomaly occurred as the Super Blue woofer approached 100Hz.  A 1/4 sub-harmonic appeared.  This is most likely due to the heavily under-damped condition the woofer was operating under.  The cone was out of control!

The upgrade is a success!  Even if my wife doesn’t care one bit and only 5% of anything I ever play through this beast of a subwoofer demonstrates the improved output, I feel the data speaks for itself and I have one hell of a woofer.  After applying the grill and putting in it’s natural habitat, it can go back to a life of patiently waiting for that 25Hz signal to wake it from it’s sleep. 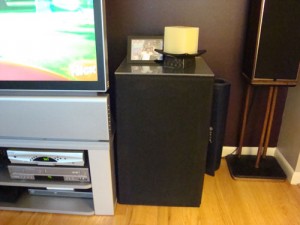