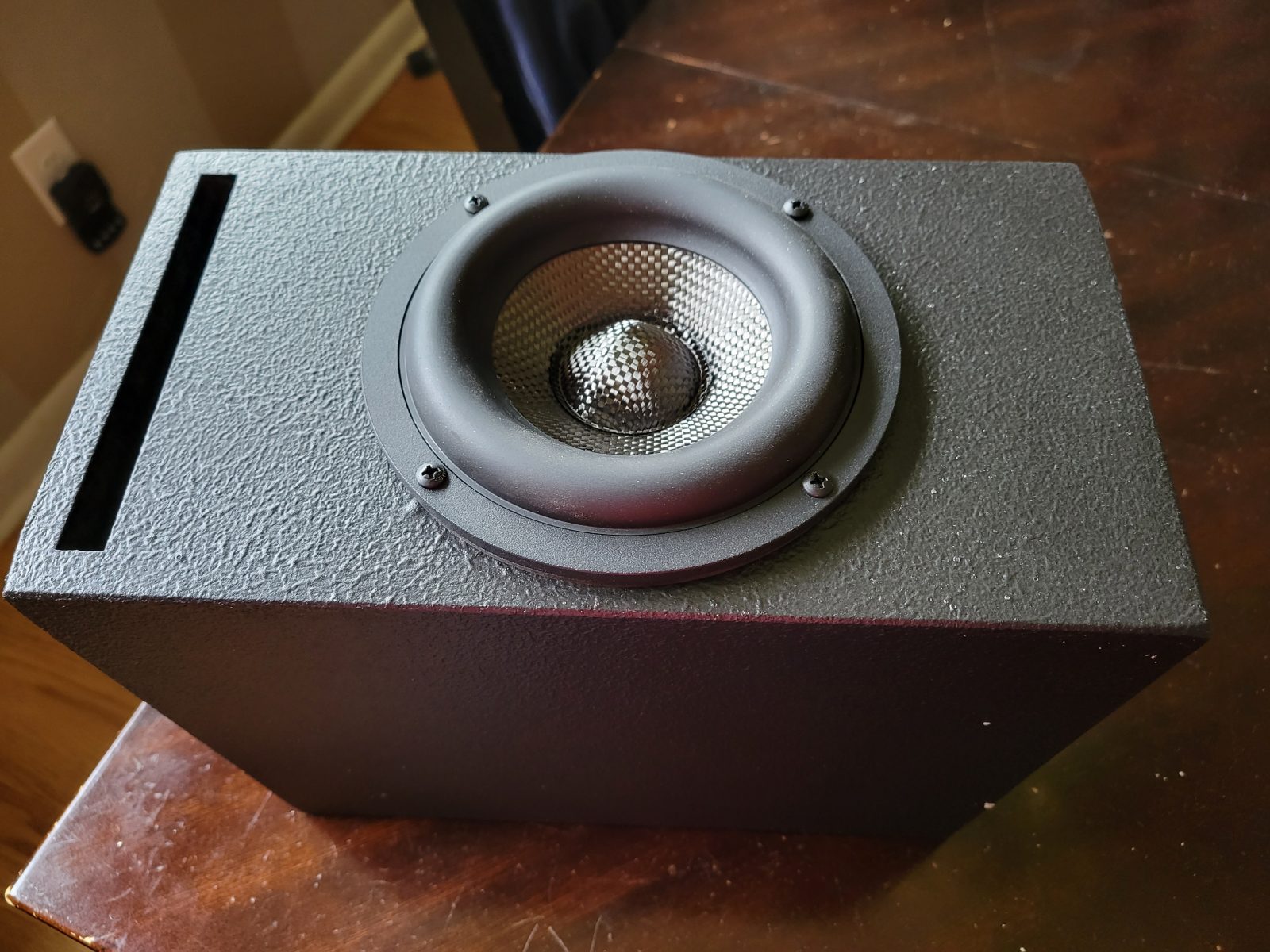 Super compact subwoofer for a truck cab with limited space.

This build was targeting a commercial truck cab.  The full size van cab has an empty space under the passenger seat appropriate for a small subwoofer to add some oomph to the door speakers.  The goal was to achieve bass output below 40Hz in that small space measuring only 10” x 12” x 6.5”.

The number of woofers that can produce bass to 40Hz and below in a cabinet with only ¼ of a cubic foot of air space is really quite small.  Between the excellent Tang Band subwoofers and the new Dayton Epique woofers, there were very few to try out in simulation.

A secondary consideration was the amplification available.  The Pioneer head unit installed was only using 2 amplification channels, leaving the other 2 channels free to drive a woofer without an outboard amplifier.  To do that efficiently a pair of 4 ohm loads would be best to get as much of that power as possible.  That pointed straight to the Dayton Epique E150HE-44.

Modeling the woofer in the box was done using Bass Box 6.  A passive radiator was considered due to the small volume and low tuning frequency, a designer series 8” radiator would just fit on top and was likely to clear the huge motor of the tiny Epique woofer with some careful arrangement.  The limitations of Bass Box made it difficult to determine the weight required to lower the tuning properly, and ultimately the added cost pointed us to use a slot port instead.

Modeling in the box with the slot port gives an F3 of 40Hz, right at the target response.

Several design compromises were made to maximize the internal air space of the box.  First, the box would be made from ½” MDF to maximize internal dimensions, and second the slot port would be assembled using 1/8” hardboard routed in with a dado slot to keep it in place and rigid.  This raises typical design concerns including box resonance and possible resonance of the thin slot port walls.  Due to the intended application in a commercial truck cab, these concerns were not a big deal.  There is far more road noise and vibration to deal with than the contribution of the compromised cabinet design.

The box was built using ½” MDF stock cut using only a hand held skill saw and clamp on guide.  The edges were all routed using a ¼” rabbet bit to gain a little strength on the joints.  My tooling capability is minimal, so there are plenty of tolerance gaps.  Using heavy duty construction adhesive fills in those gaps, and wood fill + sanding cover up all the errors.  Using a 1/8” straight router bit made the dado slots for the port walls, and everything came together with some bar clamping and patience.

All crossover duties were to be handed off to the Pioneer head unit installed in the cab.  The intent was to utilize matrix mode to cross the front amplifier over to the sub at 100Hz.  This turned out to be not possible, as the internal matrix mode was intended to be used for mid / tweeter duties making the lowest crossover point option 1.2kHz.  A power amplifier was installed and the unit switched back to normal to get a proper sub crossover going at 100Hz.  Bonus to that was extra power, the Epique woofer can take 200W thermally and has no problem with a budget 100WPC car audio amplifier.

The high aspect ratio slot port has ended up a performance limiter for this little woofer.  In use, the system rolls off quite steeply below 40Hz, meeting the design target but losing some of the high 30Hz range that should have been possible.  Additionally, the 90 degree bend and joint where the HDF panels meet are not smooth and cause significant turbulence that is audible with test tones.  In practical use with music in the truck, this is not a problem but if this was put to use in a house as perhaps a desktop system sub I would definitely re-layout the port to be more efficient or use the passive radiator solution.

This little thing sounds fantastic in its home.  In fact I think it beats my simple 8” sub installation (Bazooka EL8) in my small SUV.  That’s not that easy of a task comparing a 5” woofer to an 8” woofer, by all measures the larger cone should have a huge advantage.